Chain-Finance got an opportunity to interview Judd Bagley, Director of Communications at Overstock.com and self styled “Chief Evangelist” at t0.com regarding the e-tailer’s development of crypto-securities.

You have issued a private cryptobond and are due to issue a public cryptobond. Can you advise in simple terms what are the main benefits of using blockchain technology for this? Is it about transparency, general efficiency, settlement efficiency or are there other areas of interest?

In fact, what we’re going to issue is public equity, in other words, shares of a public company, on a distributed ledger. We may also see additional cryptobonds issued on our platform, but the next step is to issue a cryptosecurity. This is beneficial for every reason you’ve mentioned. Using this technology, trades can be settled in almost real time, instead of the three days under the status quo. True 1-to-1 settlement is also possible, as opposed to the net settlement that currently provides so many opportunities for bad behavior by certain market participants. Cost-wise, this can all be done for about 80% less than the current system.

Blockchain technology also ensures that there can be no instances of multiple selling of these shares, thus eliminating another tactic used to game stock markets.

Regarding the public cryptobond, once issued will it be freely transferable as a bearer asset or will it behave as a bond registered in an individual’s name?

All the asset classes issued on the t0 platform will be freely transferable.

What were some of the challenges you are facing pioneering in this area of bond markets? Have you found other companies interested in issuing a private cryptobond on T0? What are the concerns or points of interest for those prospective issuers?

There’s enormous interest in issuing shares on the t0 platform. We’re eager to test the concept in the near future, with the shares of a public company willing to take this bold and exciting step.

What typical concerns do regulators have when you approached them with your cryptobond idea?

US regulators don’t get involved in bond sales, so our cryptobond was sold without their scrutiny. Public equities are a very different matter. The SEC was concerned about the safety and security of the system foremost. They simply wanted to be certain that investors would find in t0 a system at least as safe and secure as existing systems.

How do you build disaster recovery in your use of public blockchains? If you have issued a cryptobond on bitcoin and it fails do you, for example, mirror the instrument on other blockchains?

One demand of regulators is that we keep the canonical copy of all the transactions on t0 in a private blockchain, in case of catastrophic failure of the bitcoin network.

Beyond Open Asset protocols, are you interested in using blockchains such as the Ethereum blockchain for the programmation of cryptobonds as ‘smart contracts’? Is it worth thinking about smart contract cryptobonds or is the current technology too premature?

t0 was built to be ledger agnostic. So as other solutions gain traction, we’ll be able to accommodate that trading as well. Smart contracts certainly appear to be one of the killer apps of blockchain technology, but for now we’re sticking with creating a solution that dramatically improves basic market structure and function, without seeking to add new wrinkles. But smart contracts will have their day on t0. 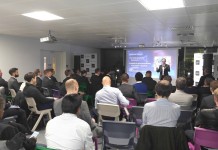