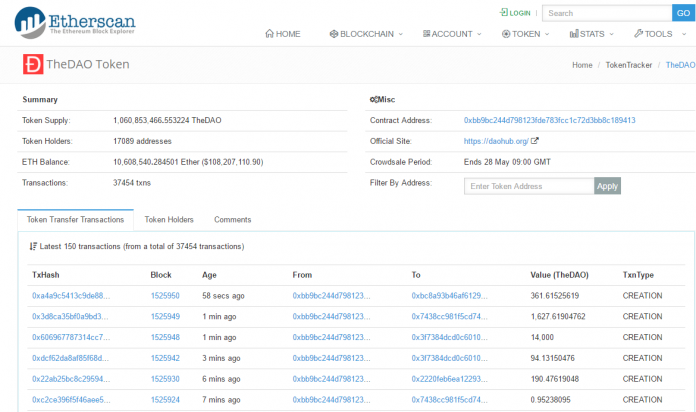 The DAO, a decentralized autonomous organization launched by the founders of Slock.it, has raised more than 10,600,000 ether (ETH) – equivalent to more than a US$108 million.

The DAO is selling a native token with the same name in return for ETH, the currency of the Ethereum blockchain.

The for-profit organization plans to use the ETH raised to “create value and provide benefits to its members while collaborating and improving the decentralised ecosystem as a whole.”

On 14 May, Daniel McClure of the DAO announced that “The DAO Creation Period (DCP) Price Increase Phase” was beginning, which involves a ETH price increase every 24 hours for purchasing the DAO tokens until 25 May 2016. The DAO toke crowd sale ends on 28 May 2016.

A DAO is an organization with publicly auditable rules distributed across the nodes or computers of the stakeholders. In the words of the Eris Industries founders, a DAO is “an algorithmically-governed programme that, in using trustless decentralised computing, can serve as a way to formalise multilateral relationships or transactions outside of traditional legal architecture.”

Slock.it is a German-based startup utilizing blockchain technology to enhance the Sharing Economy.

PwC Promotes Use of Digital Assets with New Launch