Today Minister for Cabinet Office Matt Hancock gave a speech highlighting the possibility of the UK government utilising the potential of blockchain technology to transform the way government works. Speaking earlier at Digital Catapult in London, Hancock drew parallels older technology enabling an improvement to efficiency and reliability, as well as noting missed opportunities when new technology had failed to be exploited.

Using the development of the typewriter and its ability to create a carbon copy of a document as an example, Hancock pointed out the benefits of having multiple copies of the same piece of data in helping to prevent fraud, with distributed documents decreasing the chance of any tampering going unnoticed and unchallenged. Whilst this was very basic security, the degree of trust that blockchain technology would bring, using the principle of a distributed ledger, would allow for parties to work with confidence in the data.

“It’s about changing the business model. Not just about doing the old things in new ways, but changing how we deliver for our customers: the citizens of this country. And part of that story is about using new technology to build and foster a new culture of trust. Within government and further afield.”

The next step, Hancock declared, was a ‘government as a platform’, which was a term he explained that didn’t just refer to technical platforms, but also standards, design and service patterns, data registers, and the skills and capability of the people who deliver digital services, as well as the whole business of government. The decision to take this approach apparently came from the transformation of services when replacing the old paper-based process with a digital equivalent online didn’t cut it and it was decided that simply digitising an old system was not good enough.

In the effort to combine all of the elements into the ‘government as a platform’ in an ecosystem of interconnected components that could be accessed by different departments, Hancock returned to the issue of trust in order to be able to utilise and work with the data in a system. This is where the big benefit of blockchain technology, which many services and companies have already benefited from, lies; the fundamental integrity and immutability of the system supplies all the necessary trust.

“Blockchain technology is not going to solve every problem, or work in every context. When a trusted body already exists, for example, that can hold canonical data, that’s often the best solution. But the fact that data held in the blockchain comes with its own history, and that history is a fundamental part of proving its integrity, this fact is enormously powerful.”

Currently, the government has committed to investigating and supporting blockchain technology by granting the Alan Turing Institute £10 million to investigate digital currencies, distributed ledger technologies and all possible use cases for blockchains in government. Hancock declared that the government was exploring the use of a blockchain to manage the distribution of grants. Monitoring and controlling the use of grants is incredibly complex; a blockchain, accessible to all the parties involved, might be a better way of solving that problem. Additionally, with cryptocurrencies using blockchain technology to track money, the possibility of using it to track finances such as student loans was raised, or the possibility of the Department for International Development tracking money to the aid organisation spending the money in the relevant country.

Although these examples were given, Hancock assured listeners that these were just some of the ideas the government is considering and that it was still in the early days. He also stated that the government would welcome input on how to make the most of modern technology in order to improve the lives of the citizens of the UK. 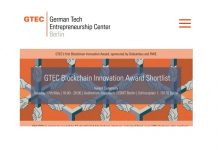