In his speech, Tsang stated:

“Government will encourage the industry and relevant organisations to explore the application of “Blockchain” technology in the financial services industry, with a view to developing its potential to reduce suspicious transactions and bring down transaction costs. The Cyberport will provide training to the industry through its incubation programme to promote relevant technologies for developing more services and products.”

Up until recently, the Hong Kong Government has been cautious about jumping on the blockchain bandwagon. However, the movement of many countries to develop and adopt the technology has provoked the Asian financial center to formulate plans for the blockchain.

In particular, Singapore’s advances in the implementation of blockchain technology are almost certainly on the minds of Hong Kong’s bureaucrats. At the end of 2015, Singapore’s Infocomm Development Authority of Singapore (IDA) successfully completed a proof of concept delivering the first application of distributed ledger technology to enhance the security of trade finance invoicing.

In addition to the Financial Secretary’s comments in his speech, the Financial Technology Steering Group released a report on Friday that proposes a number of recommendations to further Hong Kong’s development as a Fintech hub. In accordance with Tsang’s remarks, the Steering Group encourages the financial industry and relevant organisations to explore the application of blockchain technology in the financial industry, with the aim of using it to reduce both “suspicious transactions” and transaction costs. The group highlights the funding opportunities for fintech enterprises, such as the Innovation and Technology Fund and the Cyberport Macro Fund announced in the 2016 Policy Address. Together, this pool of about $5 billion is available to ventures and research projects in any technology areas including fintech.

The Fintech Steering Group is led by the city’s Secretary for Financial Services and the Treasury, K C Chan, and was setup in April 2015 following the announcement of its establishment in the Financial Secretary’s 2015-16 Budget.

“Fintech has the potential of disrupting because of the new way of doing things. Take blockchain as an example. Some have estimated that the blockchain technology can potentially reduce banks’ infrastructural cost in the range of US$15-20 billion per year by 2022.

I am very delighted that you are working on this concept and you can help us dispel some of these misconceptions about the blockchain technology in our community. Blockchain has interesting applications and when applied rightly it actually reduces the transaction cost tremendously for the banking sector.” 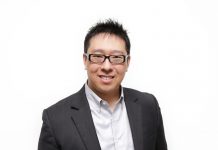